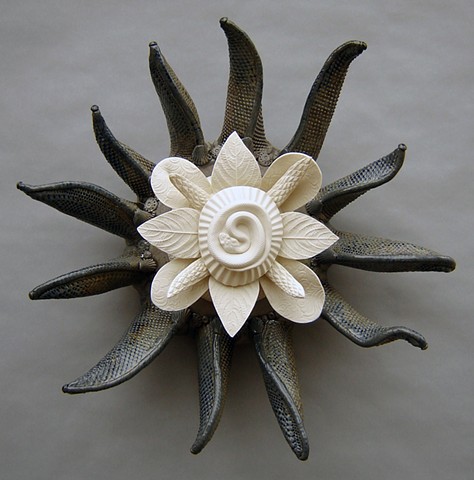 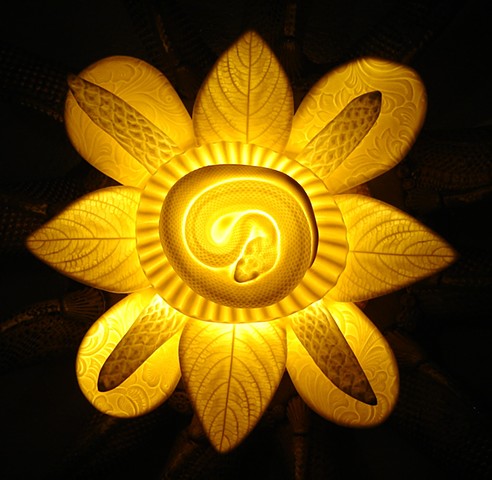 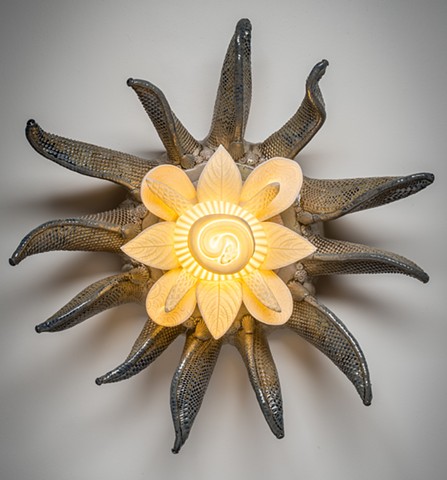 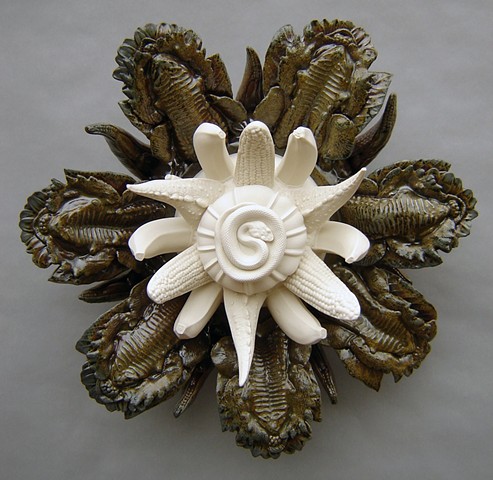 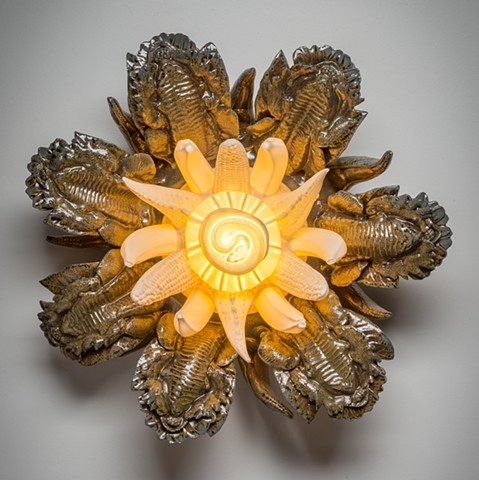 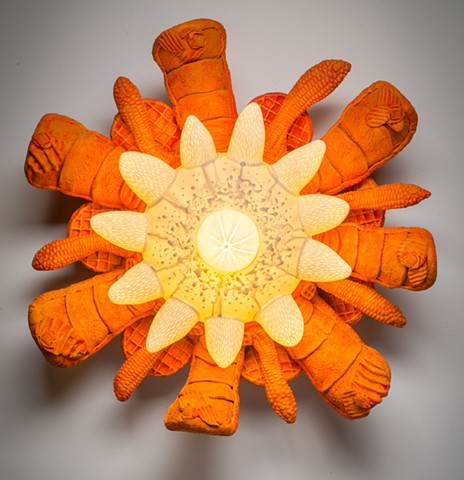 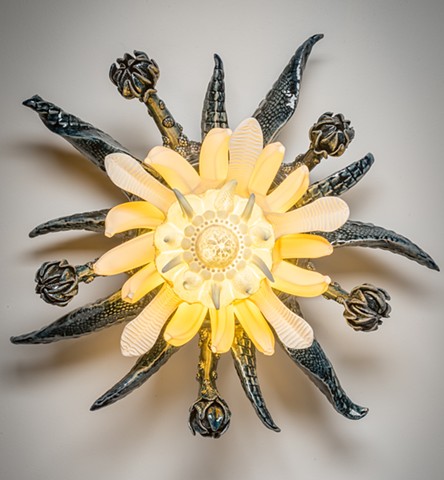 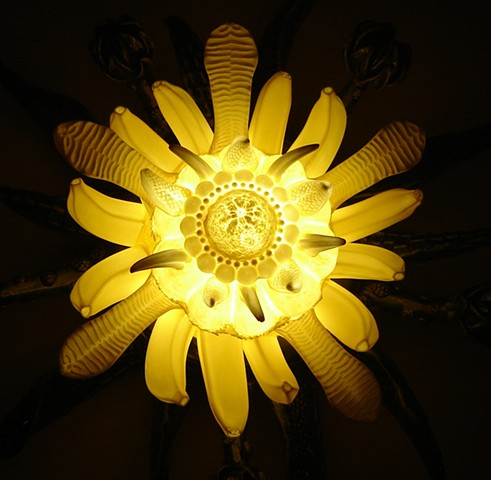 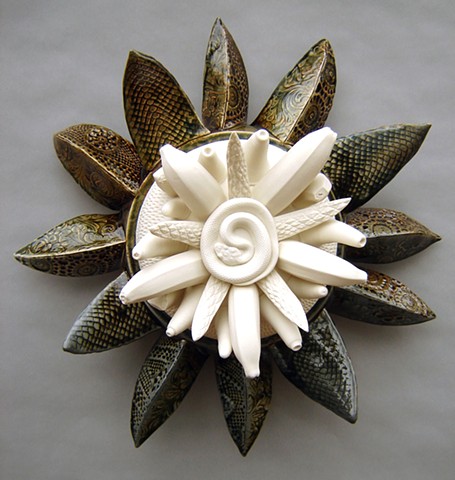 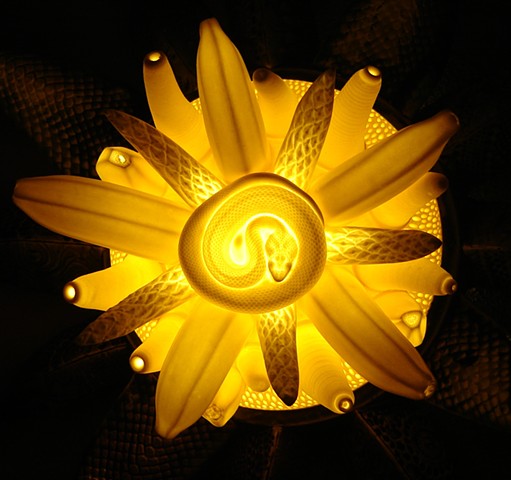 Poison Flower, with Garfish and Pinecone 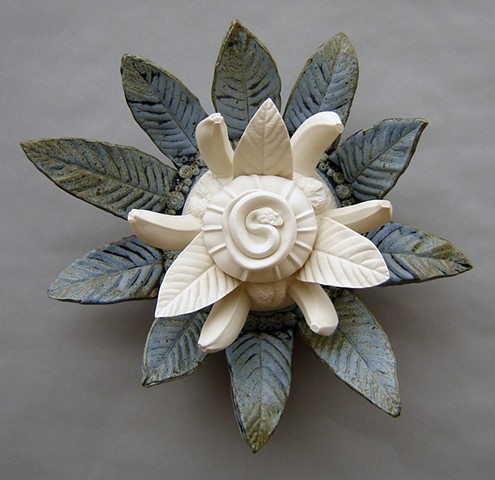 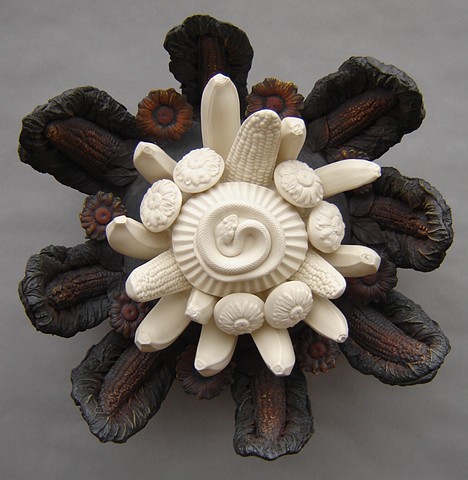 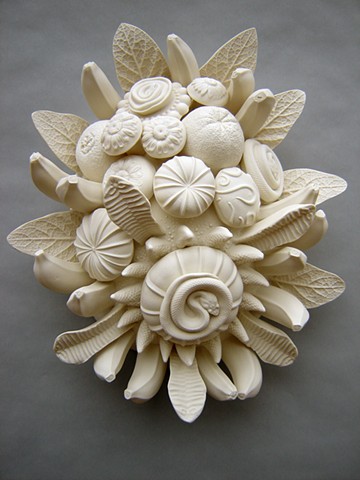 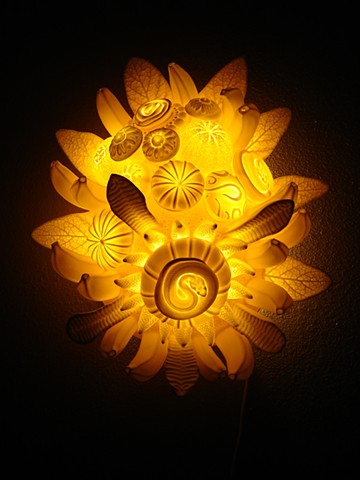 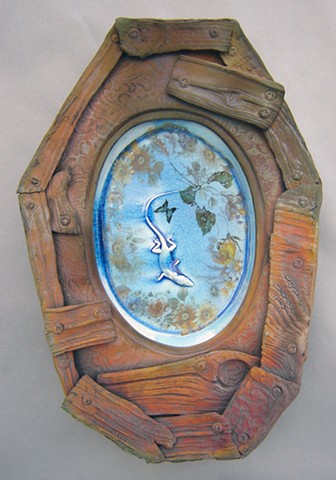 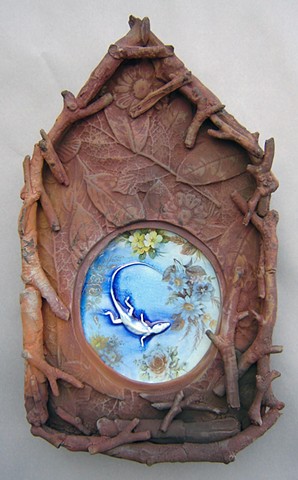 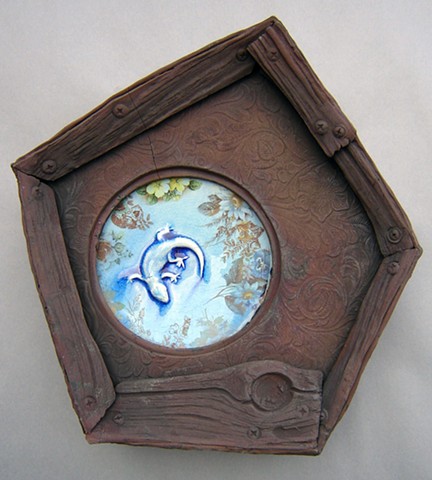 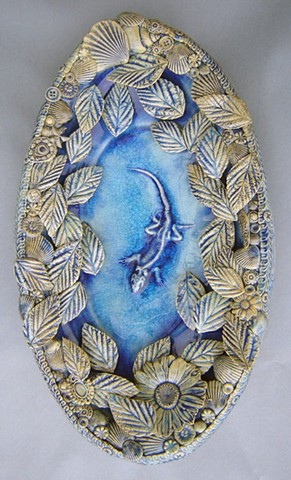 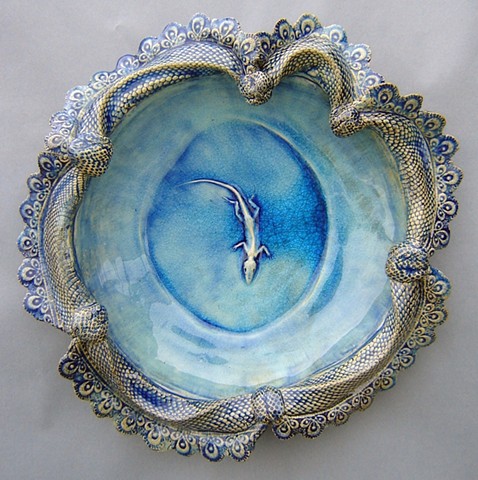 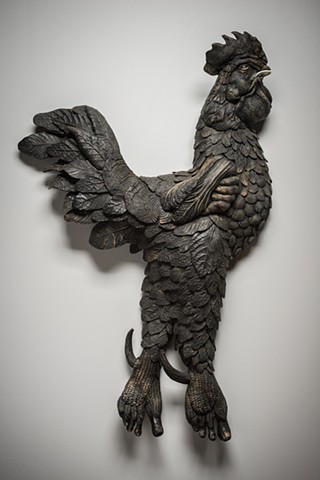 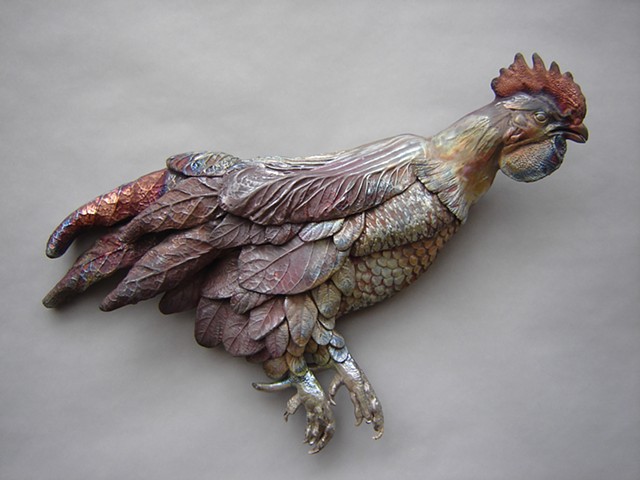 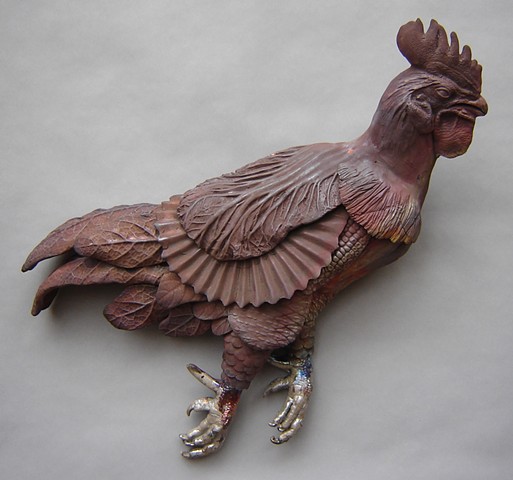 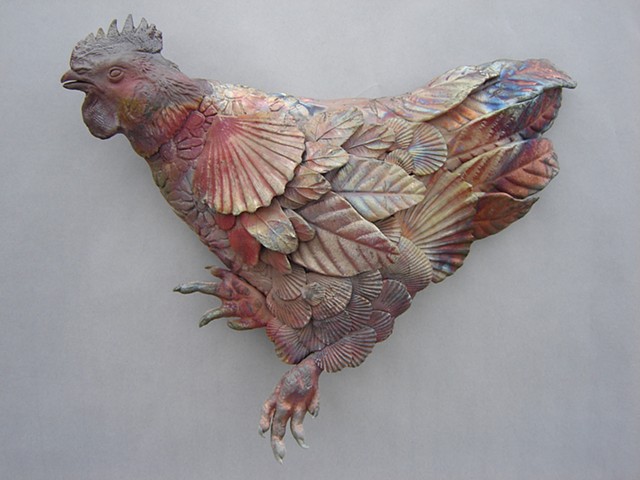 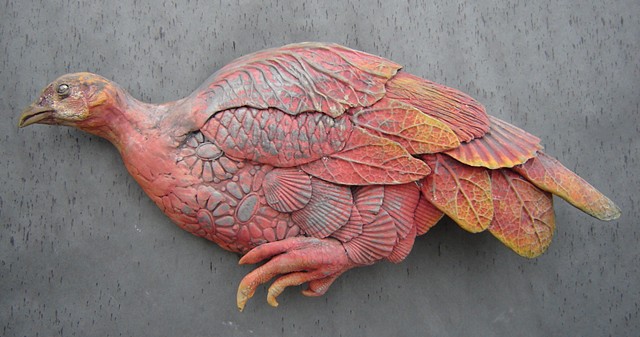 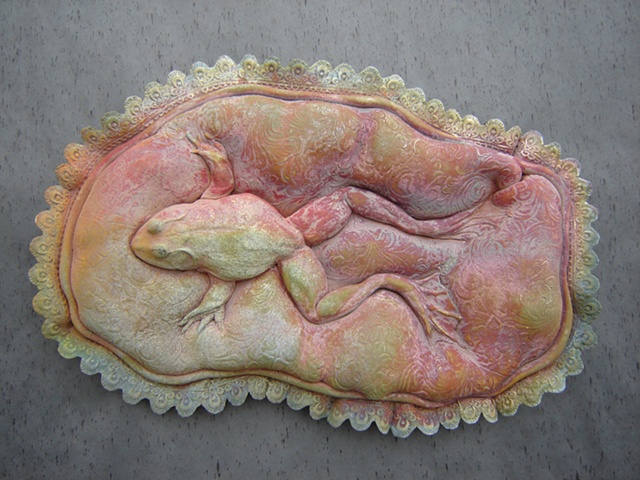 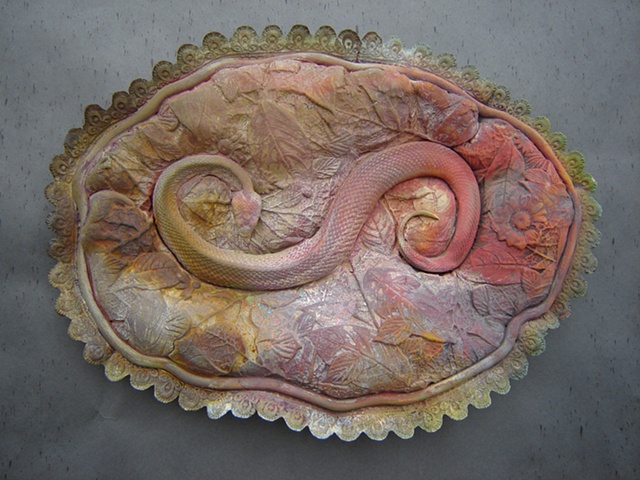 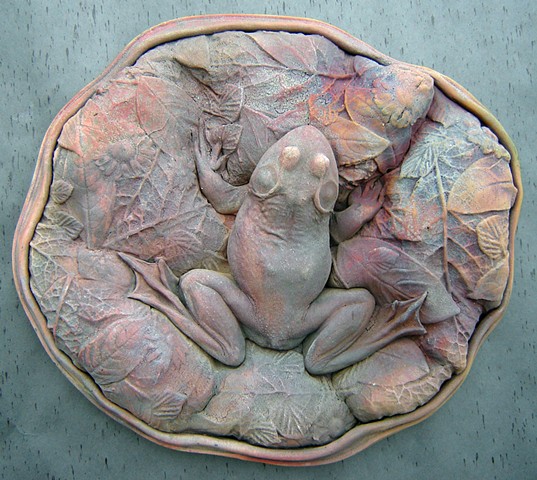 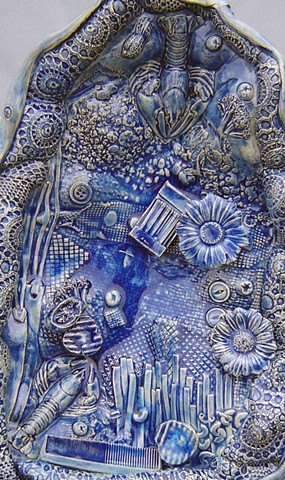 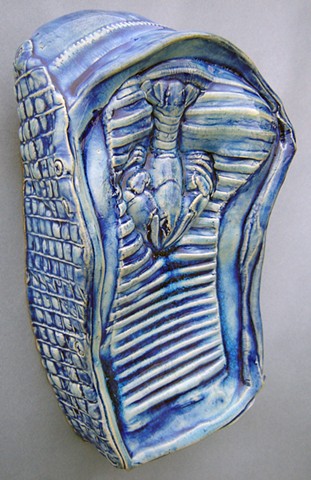 Feral Gardens is a body of work that has developed over many years; this work was obviously inspired by my life-long interest in the study of nature. These ideas also have strong ties to my experience working for my step-father in the taxidermy studio. The imagery and design of much of the work was also influenced by my grandfather, who owned a chain of flower shops and taught floral design at the local community college.

However, the initial ideas for the actual pieces began to germinate when I was first introduced to the work of Bernard Palissy (French ceramic artist, 1510 -1590), and how he constructed idyllic portraits of natural systems (ceramic versions of ecosystems, very similar to the taxidermy displays found in a museum of natural history). In much the same way that Palissy created compositions depicting ideal scenes in nature, I have been creating work that focuses on nature, but without removing the influence of human activity.

I have explored land all over this country, from Southern Louisiana and Florida to remote areas of Montana and Alaska (and just about everything in-between), and have discovered that I am unable to find anything ‘pristine’ or un-touched by the human hand. The remote corners of the world have all been manipulated and changed by human activity; the wildest places 100 years ago are now tamed with roadways, convenience stores, and mini-malls. I once explored the Atchafalaya Basin in a pirogue – in addition to seeing snakes and alligators I also saw a half-submerged dishwasher and a floating diaper.

However, life is tenacious. Nature quickly reclaims what we abandon -- vacant buildings are consumed by vines and termites, empty lots become over-grown jungles, and animals of all sorts thrive in the ruin and rubble of our neglect and waste. Although far from pristine or un-touched, the wildest places I’ve enjoyed exploring have been on the fringes of cities (or sometimes even within the city).